[First in a series of posts about random elements in boardgames.]
One of the virtues of Boardgame Geek as a site stuffed with "user-generated content" is the insight it provides into those users. From reading that BGG content, it's clear that boardgamers have widely diverging attitudes about randomness in games. To some extent, these attitudes are a question of taste. But beyond the cursory de gustibus disclaimer ("This game is just not for me..."), people hold strong opinions on this subject.
For some boardgamers, it's an anathema, so that the enjoyment of a game is in inverse proportion to the influence of random elements. For others, randomness adds to the gaming experience.Unlike the other faction of gamers, this cohort doesn't have quite as simple a formula for calculating the effect of randomness on games. Enjoyment may not be directly proportional to randomness, but below a particular threshold of randomness, the game loses its attraction. 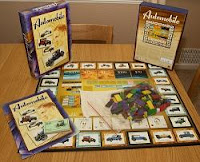 Take, for example, the fans of the games Automobile and Dungeonquest. Automobile has no random elements, other than the decisions other players make. While other players can and do mess with you, the game rewards some level of planning, particular within a single turn. If I build distributors, you may interpret that move as a threat, and respond accordingly. Taking these measures and countermeasures into account, I plan my turn accordingly, timing actions (building distributors, opening factories, building cars, etc.) based on both what I want to do, and how you're likely to interfere with me.
Dungeonquest provides the opposite gaming experience. There's little interaction among players, other than an implicit race for the exits when it looks possible to score points before the game ends. Randomness is not only greater than in Automobile, but it's almost the defining characteristic of the game. Random tile and card draws provide tension (Am I pushing it to try to steal one more treasure from the dragon?) and black humor (Not another piiiiiiiiiit!!!), the major reasons why people play the game. The game might not have as many interesting choices as, say, Paths of Glory or Twilight Imperium, but there is a strategy that rewards a player's ability to balance potential reward against definite risk.
Greg Costikyan's excellent and frequently-cited article about randomness in games does a great job of explaining why, in games like Axis and Allies that are chock full of random el
ements, strategy is just as important as in games with no randomness, such as chess or checkers. Some elements of those strategies, such as anticipating counter-measures, are the same. Others, such as pushing your luck, don't exist unless luck is a factor.
Costikyan uses the word aesthetics to describe the experience of playing the game. In the PC and console gaming worlds, first person shooters like Call of Duty have a different aesthetic than role-playing games like Dragon Age. Different aesthetics appeal to different kinds of gamers, or the same gamers when their momentary tastes steer them towards a particular kind of gaming experience.
Let's take that word aesthetics a bit farther than Costikyan did to understand the role of randomness in creating that aesthetic. Randomness is not only a tool for enhancing the generic qualities of a particular class of game, making it more forgiving to beginners, increasing the replay value, and better simulating the randomness in real world situations like warfare. Randomness is also essential for creating dramatic elements that are otherwise impossible to achieve.

The recently-published card game Space Hulk: Death Angel is a prime example. The original Space Hulk boardgame attracted legions of fans, in large part because of its aesthetic. Much like its popular culture progenitor, the movie Aliens, Space Hulk depicts a nail-biting conflict between well-armed space marines and a seemingly endless swarm of deadly aliens. The most dedicated fans have dissected the three editions of the game, weighing the qualities of Space Hulk as both a game and a dramatic narrative. On t
he first dimension of comparison, Space Hulk as a game, many players disliked the second edition for dropping the human player's option of saving command points to use during the opponent's turn. On the second dimension, Space Hulk as an experience, fans applauded the high production values of the third edition, such as the map tiles, to the extent that they enhanced the Space Hulk aesthetic of extreme peril in confined spaces.
Space Hulk succeeds because of its ability to balance skill, the product of your actions, and suspense, which depends on elements you cannot control. Creating a formation of terminator marines, carefully positioned to cover every possible axis of genestealer attacks, depends on the player's skill. Creating moments of suspense depends on guns jamming, blips turning out to be dummies, critical fusillades of small arms fire missing their targets, and other moments when your best-laid plans gang aft agley.
Suspense can't exist without the unexpected and the unplanned. When you're watching North By Northwest for the first time, your pleasure depends to a large extent on not knowing what's up with that airplane dusting dead crops. The ending of Casablanca is diminished if you know what Louis is going to say. Similarly, the great moments of Space Hulk depend on not knowing when events will go south, or what will happen when they do.

The card game version of Space Hulk, Death Angel, re-opened many of these discussions of what makes Space Hulk a great game. (At least, for some.) This review on BGG is typical of the person for whom Space Hulk, in any form, is the wrong game. Anyone who says, "The game has a mechanic where you can spend tokens to reroll attacks and defends, but it is not something to be relied upon," is largely missing the point of Space Hulk.
Imagine yourself back when you saw Aliens for the first time. Now, picture someone sitting next to you, loudly proclaiming how disappointing the movie was. "You call that small unit tactics?" he yells at the screen. "Where are your reserves? Why don't you recon a position before sending in the entire squad? And what idiot would leave the heavy weapons team that exposed?"
Of course, this person is missing the point of Aliens. Further realism in small units tactics wouldn't make Aliens a better suspense movie. In fact, too much attention to small units tactics would distract from the suspense. Knowing the outcome ruins suspense. Keeping the outcome a mystery, despite the protagonist's best preparations, is the essence of suspense, in movies or in boardgames.
Posted by Kingdaddy at 11:04 AM